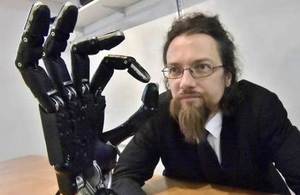 Robot hand technology developed by a small London-based company could help older adults, particularly those in the early stages of dementia, keep their independence for longer.

The Shadow Dexterous Hand, a robot hand with 20 movements where most robot grippers have two, makes its own decisions on how to pick up, grip and release objects.

This innovation has opened the door for Shadow Robot Company, inventor of the hand, to join two consortia developing robot technology that can allow people to stay independent in their own homes.

The CHIRON project has provided Shadow Robot and its partners with £2 million funding through Innovate UK to develop a robotic solution that can be adapted to different tasks.

Since January 2015, Shadow Robot has also been part of a three-year European collaborative project that is receiving a total of €3.8 million through the Horizon 2020 research and innovation programme. The partners are researching and developing robotics, not only for older adults but also for those suffering from mild cognitive impairments and dementia.

“A common problem is that people with dementia lose confidence in their ability to do things – so they stop doing them and their ability decays quite quickly” says managing director Rich Walker. “This kind of technology can help people to continue performing those tasks and keep the brain active for much longer.”

At the heart of their innovation is a system called Grasp Stabilisation and Control (GSC). It uses algorithms and software to mimic what goes on in the human brain, so a robot hand can do the things that people do naturally – see an object, pick it up, hold it and put it down.

Shadow Robot has grown from two original founders in 1997 to 25 employees, mainly engaged in software and hardware development.

The AAL Smart Ageing Challenge Prize was launched to encourage innovation with internet-connected technology designed to empower older people to achieve the best possible quality of life, socially and independently.

Judges will be looking for solutions that improve connectivity between older people in any aspect of life – at home or at work, with transport and mobility or with any other service older people may want or need.

The entry deadline is May 13 and the prize will help the most innovative ideas to develop prototypes and business plans. Fifteen of the most promising applications will be chosen as finalists and will be invited to a social innovation mentoring academy in Brussels in July, where they will receive expert coaching and support to develop their ideas.

Following the academy the finalists will be asked to submit a detailed plan of their idea. From these detailed plans, five applicants will be selected who will have the opportunity to attend the AAL Forum in Switzerland in September 2016, where one winner will be chosen and the €50,000 prize presented.

The deadline for the first submission is Friday, May 13, 12 noon.

Visit http://www.aal-europe.eu/aal-smart-ageing-prize/ for details about how to enter.