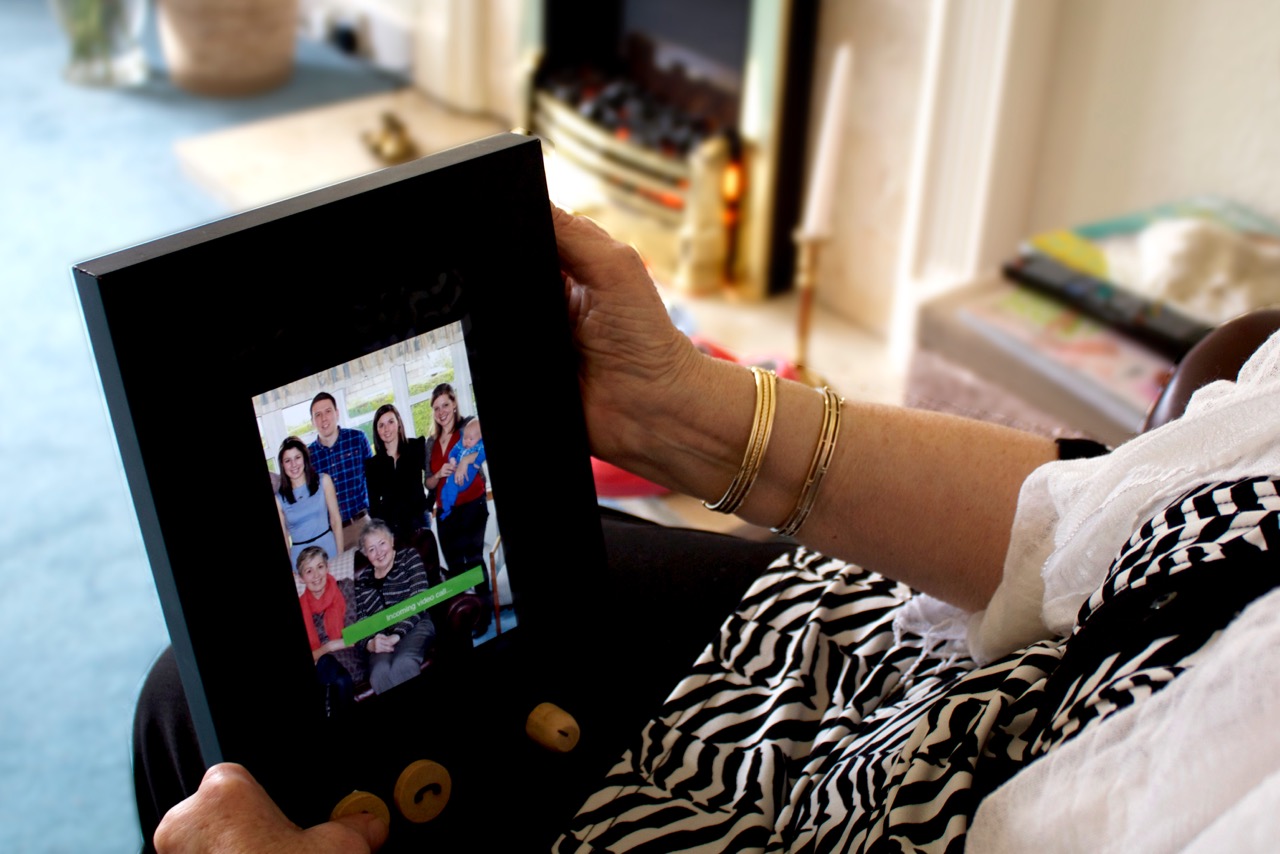 Older people are especially vulnerable to loneliness and social isolation, which can have a significant impact on health. Communication via tablets, phones and personal computers would appear to offer the perfect solution to this big problem, but using such devices is often a challenge for those who have not grown up with them. Now, a young Scottish designer has come up with an ingeniously simple device that bridges the gap between modern communication technology and older generations.

Flux is a video chat device designed to digitally connect older generations to their family through a simple, easy to use interface. Its physical controls and simple interface provide a platform for users to connect with family via Google Hangouts. Allowing family to join the call on any personal device gives it mainstream appeal, so it can be adopted by anyone. While not in use Flux displays a family photograph, fading over time to indicate when the user last connected to encourage frequent interaction with the family.

Design graduate Rachael Johnston came up with the idea for Flux in response to research into impressions that older adults have of modern technology, as well as from her experience of volunteering at an elderly computer club. “I looked into the ways in which elderly people communicate with each other and use technology in their everyday lives,” she says on her website. “There was a common theme; interfaces are often too complex for elderly users, because the technology hasn’t been conceived with their needs in mind, often taking a long time to learn and lacking similarities with products and technology they are accustomed to using. By tapping into existing technology and turning it into a physical product for the elderly, connecting with the family becomes much easier.”

Now Flux has been shortlisted for the first ever Active and Assisted Living (AAL) Challenge Prize, which is awarding €50,000 for the best product or idea that uses internet connectivity and the Internet of Things (IoT) to empower older adults to achieve the quality of life to which they aspire, socially and independently.

15 entrants from a healthy total of 200 have now been shortlisted for the prize and these finalists will now attend a special Innovation Academy in Brussels in July, where their ideas will be further scrutinised by the judges and where they will also receive advice on how their ideas can be further commercialised for what is a massively growing market.

“I’m really grateful for the opportunity this competition has given me,” says Johnston. “At the time of completing the project, I wasn’t in a position to take the product to market. Now, with business mentoring and support, I have the potential to enter the market and discover the positive effects this simple piece of technology can make on peoples lives in the real world.”

Karin Weiss, Deputy Managing Director and Head of Grants at the AGE Foundation and one of the competition judges, said: “We were delighted by the variety of entries we received. We saw many interesting solutions and were particularly impressed by the approach taken to bridging the gap between the older and younger generations, as well as the approach to stabilising the quality of life at home for older people.

“The challenge now is to identify a winner that is exciting, commercially viable and close to the edge of the market,” she adds. “We want to see the prize being used to connect this potential with investors, refining the prototypes and creating impetus to get the solution to market.”

A huge amount of work is being done in the UK in the sector and, with designers such as Johnston already engaged in developing solutions designed to increase the quality of life for older people, hopes are high that this simple, smart solution will pick up the top prize when it is announced at the AAL Forum, being held at St Gallen, Switzerland, in September.