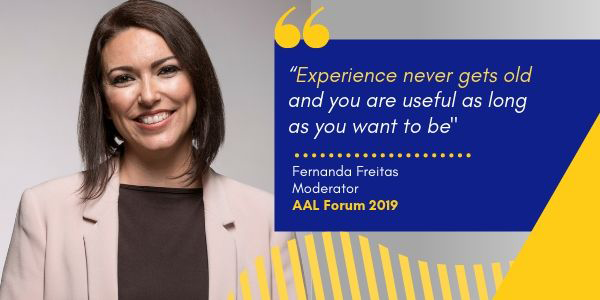 Fernanda Freitas is a journalist with a keen interest in the topic of ageing. For those of you who have attended the AAL Forum before, you may well remember her as the host of the 2017 edition in Coimbra, Portugal, and this year she is returning to moderate the plenary sessions. We caught up with her to find out more about why she considers the world of active ageing to be such an important matter, and why she thinks it is essential that we should all start thinking about how we age as soon as possible.

Tell us about your interest in the field of active ageing.

I was the National Ambassador for the European Year of Active Ageing and Solidarity Between Generations in 2012. This was an amazing experience and really got me involved in the whole area, especially the technology side of things. We all tend to think that technology is for young people, and then I was introduced to this whole world of new ideas and tech all aimed at older people and healthcare.

It’s really an issue that I love. I used to work in public television and I had a daily show called Civil Society, and each week we spoke about something to do with active ageing. It’s something we have to live with from the moment we are born. We are all affected by ageing – not at the same time – but it affects us all.

But the part I am especially interested in is to do with old people living alone and not having any social link to anyone. When we worked at the European Year of Active Ageing, one of the points they made was that loneliness is one of the worst things for your health. One of the big issues that we worked on was intergenerational activities, which helps to show that everything can be done, regardless of your age.

I recently saw a wonderful film called The Intern, with Robert de Niro and Anne Hathaway, in which De Niro plays an older man interning at an online business. I fell in love with this movie because you can see all this experience that he has and how good it is for the young people that work at the company. It showed that experience never gets old and that you are always useful as long as you want to be.

You mentioned that you are particularly interested in the issue of loneliness. How can we address this?

One thing I remember very well at the AAL Forum in Coimbra was when they brought a group of older people into the exhibition. When they arrived, they were all walking slowly, not that happy, looking like they were thinking “what are we doing here?”. But when they realised that people cared about their opinion, and they had all these things to do, they changed. They walked around playing computer games, they had doctors telling them how these technologies could help them, and you could visibly see them change and become like new people.

I think we have two problems. Firstly, people don’t tend to live near their parents anymore, and this can leave older people without a lot of connections. Then we also have the problem of when people retire, they often feel like their life has ended. This is a perception we have to help change. There are these senior university courses that are available in Portugal, which people absolutely love because it also provides a level of networking in the classroom. People who go on walks, go to museums, learn to play an instrument – these are the people who don’t really get old. So it really depends on how you look at your ageing.

This changing perception of what it means to get older was the focus of one of the main talks at the AAL Forum in Coimbra by Sacha Nauta, where she introduced this concept of the “new old”.

Yes, it really depends on how you prepare for your life after work. Maybe millennials will be better prepared for this, they are building their own way. We in Portugal have a lot of people who have not really planned for retirement and don’t have any ideas. Then they get sick and spend all their money on health, then they get depressed because they don’t have money or time or health. It’s complicated – you need to prepare as soon as you realise you’re not getting any younger. It can be anywhere between 30 or 60, it depends on the person.

Like you were saying before, it’s only relatively recently that extended families  don’t stay together in the same area all their lives. Is there a need for a cultural change that people need to prepare for not necessarily being surrounded by their families?

Yes, I think this is true. An interesting phenomena is co-living, where people live in a building with other people around the same age and who share the same interests. I don’t think there is anything less interesting than having to endure life watching soap operas all day if you haven’t done that before. In nursing homes, you can be with people who don’t share any interests that you have ever had. Maybe you can have an interesting talk with someone you never knew for a few days, but if you don’t share the same interests – if your roommate wants to watch soap operas every day and you want to read Shakespeare – it can be difficult. So it’s important to try to get people to live happily, even if they are in a nursing home.

In regards to this year’s forum, what are you particularly looking forward to?

One thing which I think is great (but won’t be doing) is the running and jogging with seniors and swimming at the harbour! Exercise is so important. One of the things I love the most is when you get people over 60 and over 70 doing an Ironman. I cannot imagine how they do it. I can’t even run for half a mile! That is the extreme level of active ageing.

The workshops at the forum are great. I went to one last time which was showing all these things that older people can still do. We have a saying in Portuguese which translates to “an old donkey will never learn a new language”. I try to learn something new every week, and I am going to do the same for the rest of my life. I try to get people around me to do the same thing. It really depends on how you prepare. You don’t change a lot of what you do when you’re 60 or 70. But if you start doing it earlier then you have this habit formed of learning new things.

The workshops looking at ways of engaging older people are great as well. In Portugal, one of the things we did was a programme where we try to help older people to get online. We got people who had never touched a computer before in their lives and put them together with volunteers who were around 15-16 years old. The volunteers told them how to open Google, use Gmail, and various other things, but also provided some awareness about what they need to be careful about online. We showed ways that people could get together to do things online, then could get together afterwards offline! It’s great to see people find out so much – they realise they can read books online. It’s wonderful when they discover the full extent of what is possible on the internet.